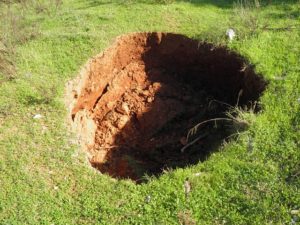 Image by Nikki Dawson from Pixabay.

Oceanside school trustees last week heard options for dealing with sinkholes at Garrison Elementary School, but the choices available made it clear that there’s no clear solution for Garrison and other aging campuses in the district.

The first sinkhole — about five feet long by four feet wide — formed at the rear of the school in February, and in May, school officials discovered a second sinkhole, about four feet long by a foot wide, on a blacktop area. As a precaution, students and staff at Garrison Elementary School were relocated to neighboring San Luis Rey Elementary School in August, but that campus also has decaying infrastructure, speakers said.