In Memory of Ron Bennett by Eric Hall 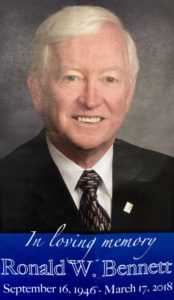 In Memory of Ron Bennett from Eric J. Hall, President of EH&A

I first met Ron when we served together on the Coalition for Adequate School Facilities (CASH) Legislative Advisory Committee in the 1990’s. Later on, when I was appointed CBO at San Dieguito UHSD, I called on Ron at Fresno Unified to get all of his “good stuff” and to pick his brain.

Ron gave me advice that I have never forgotten. He provided me with the confidence that I could do the job. He said that success is not built upon impressing others with your technical knowledge, like being able to quote the cost of a one percent salary raise; but instead success was based upon building trust and developing strong relationships. He also suggested that I learn how to make the complex world of school finance easy for others to understand.

Years later, I had the pleasure of serving as the Chair of CASH when Ron served on our board. He was a tremendous asset to us all, providing insight and perspective on legislative issues and state funding for school facilities. Ron would offer original ideas and solutions on the importance of school facilities to all stakeholders.

Ron strongly promoted CASH at SSC. He provided CASH an opportunity to speak at an SSC budget workshops and joked about throwing me to the wolves when he asked me to address the attendees and explain why CASH supported the Routine Restricted Maintenance requirement.

Ron was a master and served as a wonderful model for those of us who had to explain the complex formulas and interplay of school finance. Who will forget his famous statements such as “Don’t spend one-time money on things that continue to eat” or “CBO’s only have a problem when two things occur, when the District has money and when the District doesn’t have the money” and “Don’t try to put new leaves on a dead branch.”

Ron was fond of quoting Warren Buffet- “Surround yourself with people that are better than you…” Ron Bennett did something that few of us can do well, he made those around him better. Ron Bennett was a giant of a man. He worked tirelessly for improved funding for every child and for a better education for all. I will miss him and his love for education as well as his perspective, his wit, and passion.