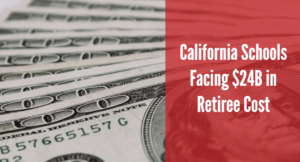 In a highly anticipated but narrow decision on pensions for teachers and other state and local public employees, the CA Supreme Court on Monday upheld the elimination of the “air time” retirement benefit in the 2012 pension reform law that then-Gov. Jerry Brown championed.

The seven justices also made clear in the unanimous ruling that they were taking no position on the bigger issue that attorneys for Brown and others had asked it to consider: Whether school districts can modify vested pension benefits granted to teachers and other public workers.

School districts have been hoping that the court’s ruling in Cal Fire Local 2881 v. CalPERS would at least partially release them from long-term pension commitments that have caused their pension expenditures for teachers, administrators and hourly employees to double in the past five years. But districts will have to wait for other cases to persuade the court to permit changes to their pension obligations. And then they will have to persuade the Legislature and the governor to allow them to alter the benefits they approved or require employees to pay more toward their pensions.