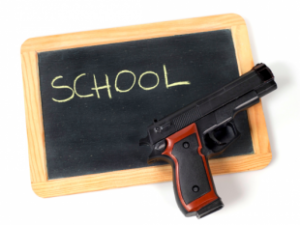 Overlooked by most mainstream media in the debate over whether or not to arm teachers is recognition that the question touches on intricate moral issues with far-reaching consequences for public students nationwide, a professor of educational ethics argued in a new position paper.

Douglas Yacek, a lecturer and research fellow at Leibniz University Hannover, Germany concludes that while there are compelling pros and cons on the question, both sides have overlooked the ways that armed teachers can undermine the student’s right to a traditional education.

“Armed protection transforms the role of both the teacher and student such that the conditions of democratic teaching and learning are seriously endangered,” he wrote in the latest issue of Teachers College Record, published by Columbia University. “Efforts to prevent school violence may be counterproductive, especially when they are not coupled with larger-scale socioeconomic reforms.”

The idea that armed teachers will make American classrooms more safe is not a new one. In fact, at least 15 states now allow teachers to come to class armed. Following the tragic shooting at Sandy Hook Elementary School in 2012, more than 80 bills allowing teachers or other school personnel to carry weapons were introduced by state lawmakers in 2013, according to a report from the Council of State Governments.