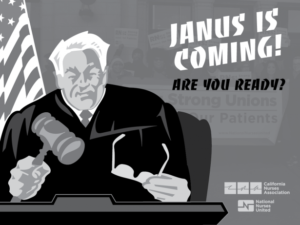 Thirteen years ago, California’s teacher union went toe-to-toe with the state’s movie star governor and crushed him at the ballot box, funding almost half of the $121 million campaign that swamped his proposals to revamp tenure and restrict government spending.

The rejection of Gov. Arnold Schwarzenegger’s 2005 initiatives sent a message that tangling with the state’s public employee unions would be a costly and a potentially fruitless fight. But the next governor might not have to make the same calculation.

The Supreme Court heard a lawsuit February 27th that could weaken the state’s public employee unions by forbidding them from collecting fees from workers who don’t want to join them.

For an article on how unions in CA would be financially ruined, click here.

For an article on how the case was presented and an opinion on how the justices might vote, click here.